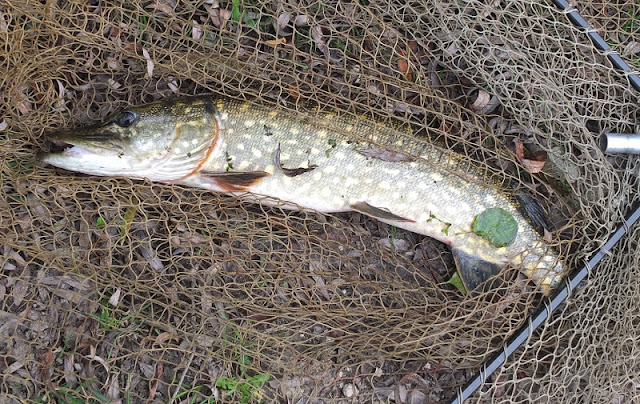 This one hit the lure and threw it in a tailwalk, before it chased it half way across the drain and nailed it under my feet. Not the biggest pike I've ever caught, but it has to be one of the maddest. It came on a day when I not only caught several, but learned loads.

I kicked off on the Big Drain, after reading a snippet in the local paper which said lure anglers had been enjoying multiple catches. I guessed where, as bitter experience has taught me there's only one part of this drain where the fish seem to congregate in numbers. 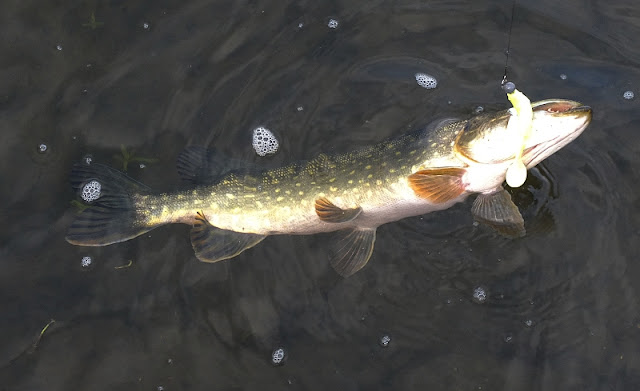 Head down there, three or four chucks and bingo. I'm struggling with westerly tearing down the cut. It's hard to keep the line tight, let alone feel what the lure's doing in 20 knots of wind. Two or three fish hit and come off, maybe because I've filed the barb down on the jig head and there's so much bow in the line when one hits that the fish throw the lure as I bend into them. 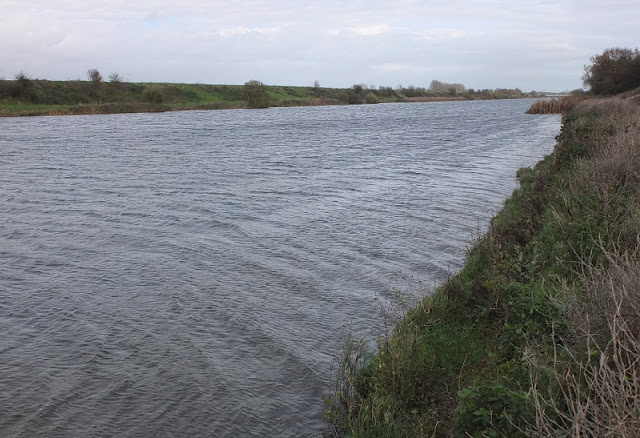 Go somewhere else, a little voice in the back of my head says. I have a feeling they'd be really up for it today, if I could only fish the lure right.

The Chipper Bailiff appears as I'm walking back to the wheels. Hella, Chris. Hella, me ole podna. Chips says no-one much has been on the next stretch I fancy, where a drain flows through deep, tree-lined banks. So I head off there. 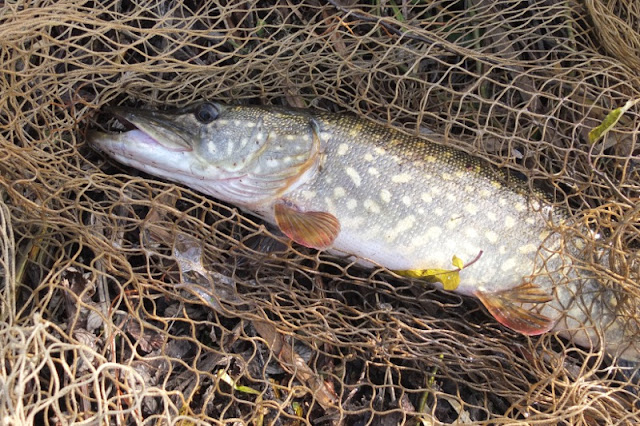 It not only looks nice, I can see where the weed is as the sun comes out. Jink a yellow shad over the top and I can see it waddling its way across. I caught a few on there too. Exciting stuff, as I saw most of them come flying after the lure before they whacked it.

The biggest one might have gone 4lbs on a good day, but every swim I tried seemed to have one or two lean and nicely-marked pike. All came on the same yellow Kopyto, that got ripped and shredded as I hopped from swim to swim.

I didn't keep count, other than the best one looked around 8lbs and I took a break to watch a marsh harrier hunting over the far bank. I was bored by 11am - I could have caught more, but I'd had enough by then.

My arms were still killing me from yesterday, when the woman who keeps horses behind the King's Lynn AA lake at Snetty brought me a Transit tipper-full of muck for my veg plots. 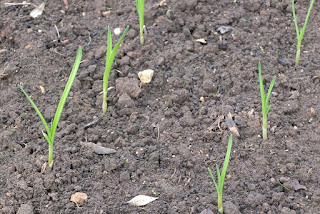 I dropped in the garden on my way home and the garlic and onions are up in the mild weather that's kissed the coast.

And just how mild is it right now? I can't remember an Autumn like it, I said to my neighbour Canary John, as we spread muck on our gardens yesty.

It's just nice to get out fishing and catch a few, on a day when they were well up for it.

Nothing any size, but I enjoyed it all the same. I'm starting to love it, like I used to. Roll on next weekend. 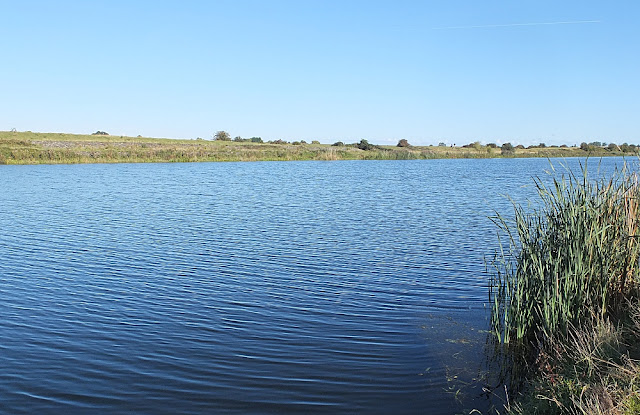 So here I am once more. In the playground of the broken hearts. One more experience, one more entry, in a diary self-penned. Ten yards up the bank and I turned off Marillion before I threw myself in the drain.

What am I doing back here, I ask myself, looking at the gin-clear drain. It seemed like a good idea when I set off, loading up the car as a skein of pinks howled overhead.

On goes a yellow rubber fish thing. I have rubber fish things in almost every colour of the rainbow, but I like the yellow ones. You can see them on the retrieve for one thing, speeding up to lift them over the marginal weed growth.

After more than 10 months off, it's nice to be fishing again - throwing a yellow rubber thing two-thirds across the Big Drain.

I even see some pike. Jacks stalk the lure as it comes into view, fins all flared. Little males chasing a gaudy invader off their territory, with no intention off eating it.

I mess around for an hour or so. Just once, a bigger fish lunges and misses leaving a cloud of silt behind it.

When the temperature hits 18C, I hit the road for home. Perhaps, just perhaps, I might get back into this. 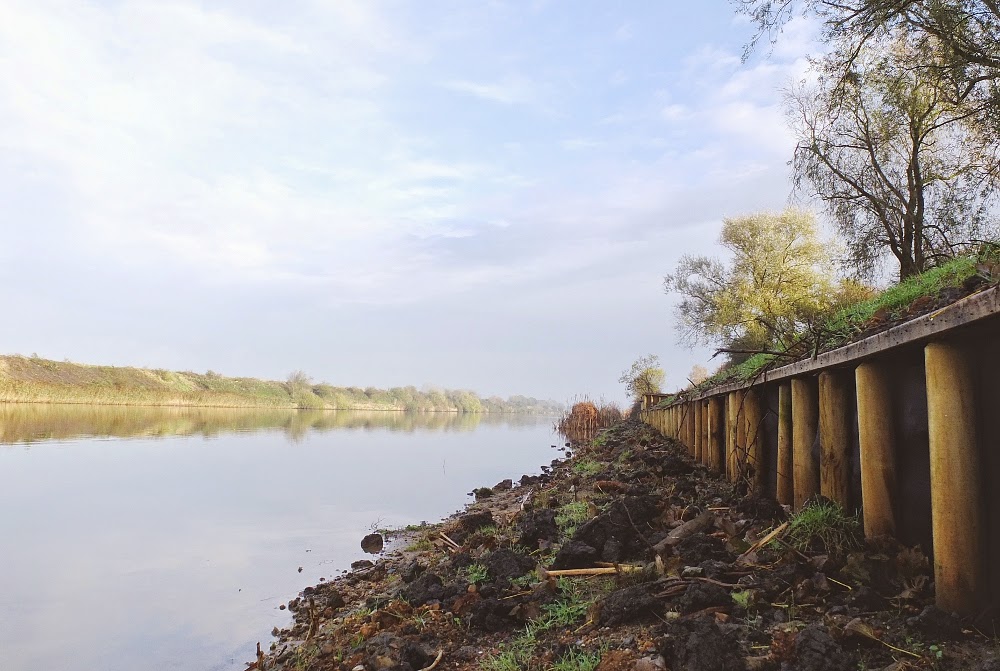 Had a bash on the new banking they've put along one of the drains first thing. Glorious morning, despite the forecast, but the level's lower than I've ever seen it and the water's so clear I can see the lure a third of the way across.

I wonder how long the new banking's going to last - clay retained by fabric, in turn retained by stakes hammered in like the ones we use to build fences with on the allotments.

An hour of this and all I had were a couple of follows to show for it. That includes one which almost beached itself as it decided to lunge for the shad at the last moment but ran out of water before it turned away in a great V-wave.

Tried the big river, a smaller river and a couple of other places before I gave it best.

Things can only get better 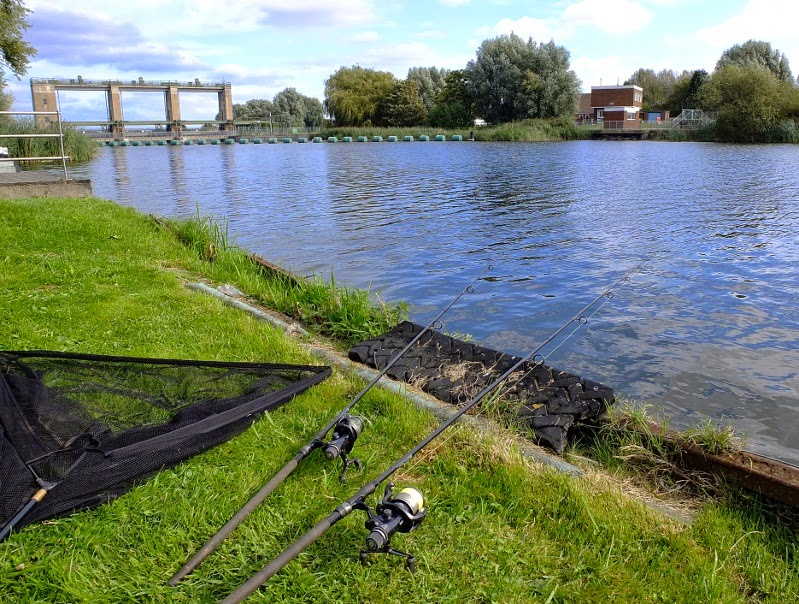 October dawns with distinctly un October-like weather, but hey ho - seemed rude not to. Twenty-two degrees by lunchtime, eaten alive by midges, one missed run. Things can only get better. Hopefully.
posted at 16:57 No comments: 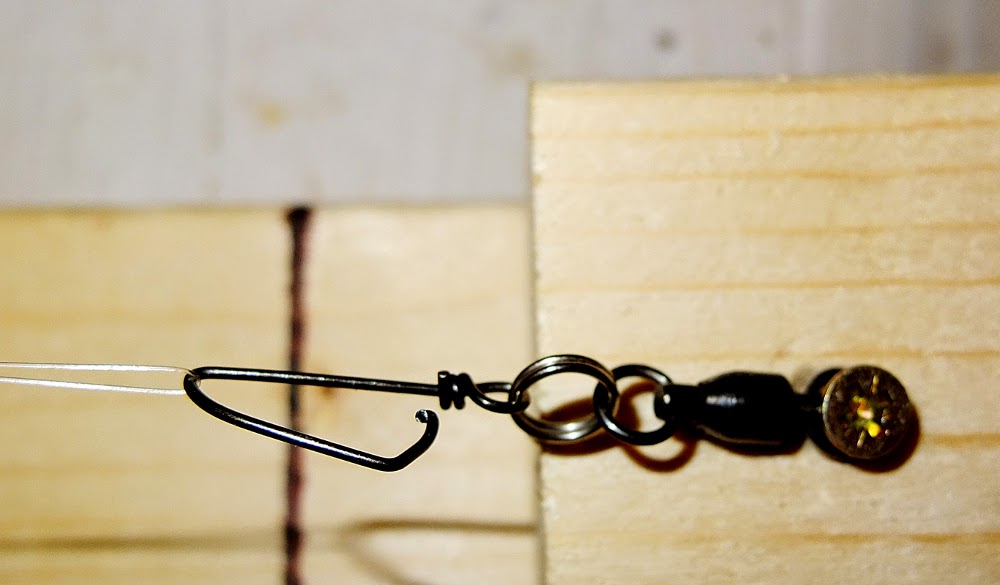 I was never 100pc happy with the crimped traces I made last winter. I didn't have one fail on me - possibly not surprising, bearing in mind my pitiful tally of bigger fish. I just couldn't find quite the right-sized crimps, it looked a mess passing the wire through three times, you need a sleeve, then you worry whether the wire's OK under the sleeve, etc.

Twisting had its drawbacks too. I know there are people in the Fens with 11 fingers, but most of us only have two pairs of hands.That means it's a faff trying to keep the turns neat as you twist and maintain the right tension in the wire to twist without unravelling or kinking it. 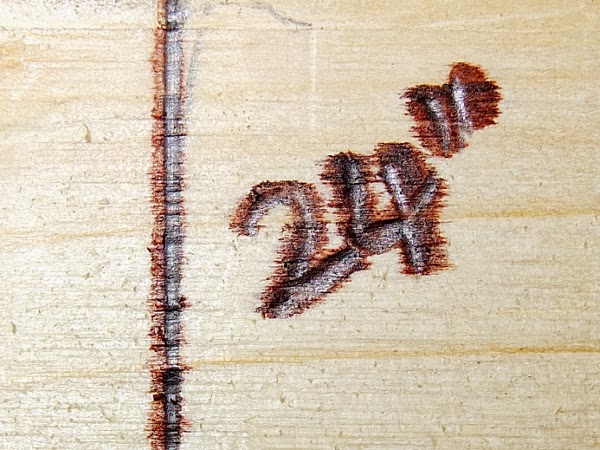 Easy answer..? Make a jig. I don't know why I didn't think of that years ago. It could be as simple as an anchorage point in a block of wood, which you clamp to a workbench or table top, or you could go for a full-on base, with different lengths marked on it.

The anchorage has to be secure. It also needs to turn under tension to get the twists right. Easy way of doing that..? Ball bearing swivel and an old coastlock. Screw it in as shown.

To start off, tie an overhand loop in the wire, cut to length and twist on the bottom hook. Do this by forming a lark's head hitch and heating the end of the wire to anneal (soften) it first. 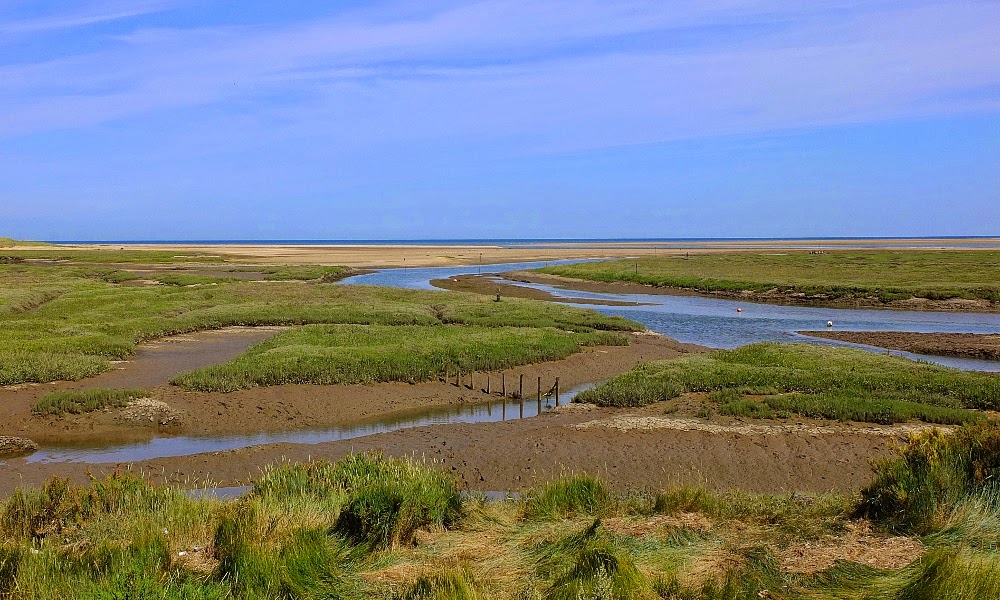 I'd forgotten just how long it takes to cover the couple of miles from the harbour along the floodbank, onto the boardwalk to the bird reserve, then along the tops of the dunes to the harbour mouth. Must have been getting on for an hour - talk about a walk.

Good job I only brought a rod and a few lures today - along with plenty of water. Incredibly, when I get to the spot there's another guy there with rod, sitting admiring the view across the fast-filling bay.

I give it half an hour, rapidly discovering it's a lot shallower than it use to be. It's only a small tide today, but there used to be more than a couple of feet of water out in the middle. I guess lack of feeding birds means if there's any action happening, it's out to sea. 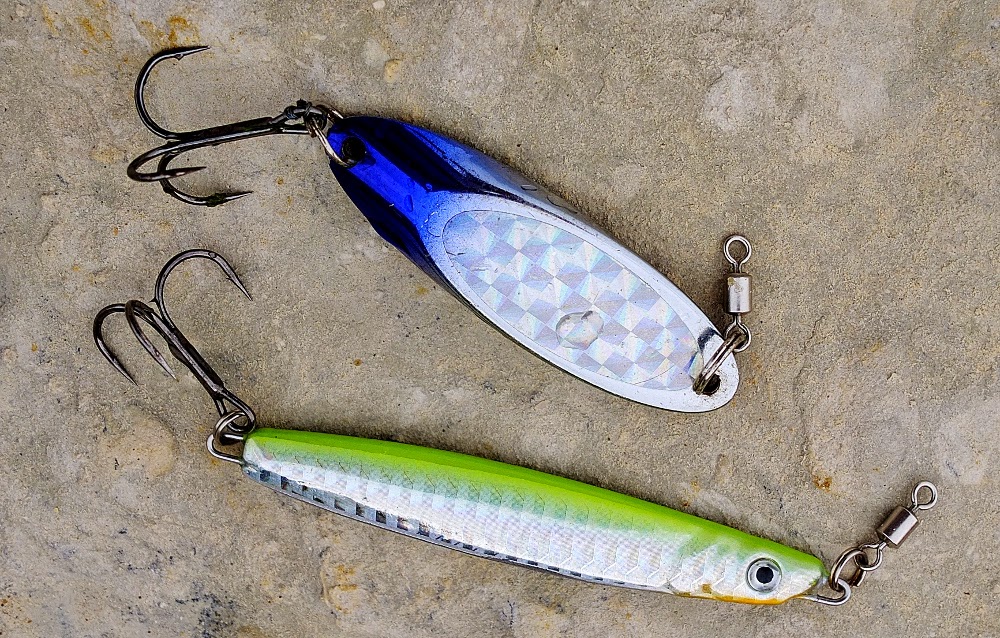 Today saw just a 6m tide on Mussel Bay, barely enough to cover the rocks on the foreshore at high water. There's worse to come, with heights dropping to 5.6m on Wednesday, before the sea starts to build again towards the end of the the week.

Some reckon the big tides, the sevens and eights are the ones to fish, with fives and sixes not worth bothering with. Others follow the you won't catch them sitting at home school of thought, and fish regardless. I've got a week off, so I'm not really bothered.

I may head for another beach I've been meaning to check out tomorrow to see what's what. It was nice today casting a new lure to see what it does - the lemony sandeel spoony thing. I've binned the packet and I can't remember what it was called. It looks nice and flashy in the water, like the wedge above it, but no cigar.

Snap up some of these 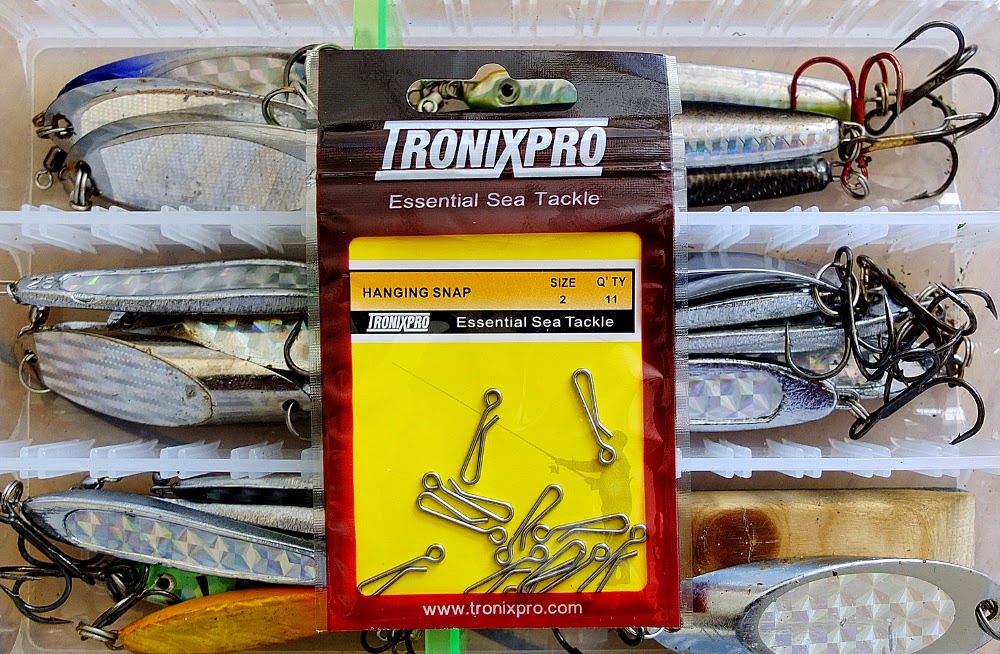 I'd never quite found the right thing for attaching lures to my leaders until I stumbled on these Tronix snaps.

They're just that bit stronger than some of the other clips I've used and much better than a cross-lock type connector.

Changing lures is a breeze, just snick it on or off. The eye's also just the right size for the 15lbs fluorocarbon I tie up bass traces with. The ones I use are Size 2, they're 99p for 10.

You could use them for freshwater lure fishing - just stick a split ring through the eye of the jighead/lure and off you go.