Beaten before I start 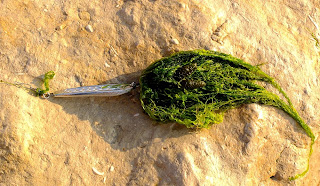 First cast, and the enthusiasm sinks like a stone as fronds of weed leave the braid looking like the proverbial clothes line, ending in balls of green snot around the trace swivel and the lure. I try a few more and can't seem to defeat the stuff, even fishing with rod up high and as much line as I can out of the water.

I switch from a foil spoon to a big Dexter, but its roll becomes muffled by weed within a dozen turns of the reel.

There isn't much wind, 10 knots tops, but it's from the north and whipping up a lumpy chop, colouring up the water as the waves roll onto the foreshore, leaving great lumps of green weed sloshing around in the troughs.

Several people walk past me armed with lure rods, heading for the favoured spots where you end up trapped by the tide for an hour or so around high water.

Needless to say, I was working then.

"Well, this'll take a few days before it blows itself out," the guy continues, before he resumes his trek along the rapidly-shrinking beach.

I look along the shore. I could just about make Whale Rock without getting my feet wet. But I fish my way back towards the sea wall instead, catching more and more weed each cast, before I break the rod down and admit defeat.