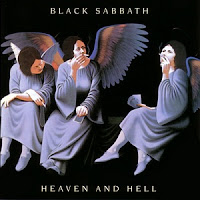 A band who look like extras from Braveheart with over-active sebacious glands are headbanging away in the beer garden.

I am attending Hawkwind Sid's first-ever rock night with Malcolm, my friend who is an architect, whose knowledge of 1980s heavy metal would fit on the back of a stamp with room to spare.

Malcolm nods sagely, as I explain how the nucleus of Black Sabbath remained true to the band's doom-laden sound in the wake of the numerous personnel changes that spanned the decades since the band was formed by Tony Iommi, Geezer Butler, Bill Ward and Ozzy Osborne, in 1968.

"They're nearly as old as that other lot you like then," Malcolm observes, holding up an empty glass in need of a re-fill. "I mean, these guys are so like years ago, they might as well be in another century, yah. Your shout either way, mon brave. I'll have a Shucky and a chaser."

The Vicar's mate is on drums, as the band shift seamlessly from Paranoid to the opening strains of Die Young, from the Heaven and Hell album featuring the late Ronnie James Dio on vocals, which was released in 1980 and many would argue remains one of the band's finest.

Pzzzzzzzzzzzzzt. There is a bright blue flash as the lights go out across the village. A dog which has urinated on a speaker stack lies twitching next to the amps, as the odour of roasting lurcher is carried across the beer garden of the Village Pub, overpowering the smell of beer and barbecued chicken.

"Lemmy - no, Lemmy," cries Hawkwind Sid, as he pushes his way through the crowd. "Someone like, um, call an ambulance - or a vet or, um, the RSPCA or something..."

Lemmy, who once blew up Hawkwind Sid's probation officer's photocopier looks singed beyond help to me, as the lights go back on, although I am no expert.

A uncomfortable silence descends on the beer garden of the Village Pub. This is not how anyone would have wished the Village Pub's inaugural heavy metal night to end.

Many - myself included - hoped Die Young would be followed by Children of the Sea, which remains one of my favourite Black Sabbath songs.

"Looks like time for Lemmy," shrugs Malcolm, my friend who is an architect, summing up the situation in the succint but poignant way that only people who design buildings can. "Good job you didn't bring your dog. He'd probably have been toast too."
posted at 22:15