Of jacks and jerkbaits 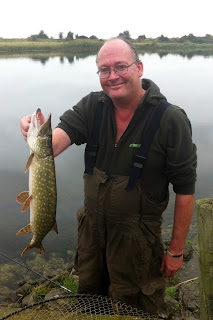 I see it following the lure - a good double that turns away from the jerkbait at the last second in a puff of silt. Next cast, the same thing happens. I swop the jerk for a Shad Rap, which fails to entice the pike back. I grab the lighter rod with a Kickin' Minnow and a jack hits it instead.

Ash comes down the bank to check I've really caught one, astonishment written all over his face. When I hand him my phone to capture the moment, he says: "Th'ass a bit smaller than the last one I photographed you with..."

Small it might have been. But after a run of blanks which was monumental even by my standards, I could have kissed it. Five minutes later, a slightly bigger one hits but comes off just before I can grab it.

Then Ash gets one, which being Ash had to be three times bigger than the one I caught, ie 6lbs on a good day. Never mind mate - at least we're catching.

The drain was backing up when we got there after a fish-less foray on one of the rivers. The river looked OK, but we soon got bored with it. The drain looks like it might produce a few more, as the gentle backward flow stops.

We set off for a yomp and find another pocket of pike a few hundred yards down the bank. We're missing as many as we're catching but it's turning into an absorbing afternoon all the same.  Lures are Ash's weapon of choice these days and he rings the changes with a succession of rubber shads with different weightings.

I stick on a great big Smuttley I got from Chico back in the days when I was into lure fishing. Ash asks: "What you tryin' to do - knock 'em out..?" But what Mr Smuttley might lack in the finesse department, he makes up for by being the lure I can throw the furthest.

Looking at the drain, which is a couple of feet below its normal level, I have a feeling the fish are going to be out towards the middle, where it's slightly deeper than along the sides on the bank we're fishing. Mr Smuttley does something else, when you chuck him 50yds and tap him back with thick, floating braid on your reel.

I've caught two more before I suss what this is. Ash twigs before I work it out - despite the great swirls which accompany both takes, along with a couple more I bump off or fail to connect with.

My lure's riding quite high in the water, zig-zagging along a couple of feet below the surface. Apart from the fact I'm not catching any of the weed which grows in great clumps here and there, the pike seem to like it in the top half of the water column.

I'm guessing this is because pike sitting in the weed or on  the bottom can see the lure a mile off as it jinks and dithers in the top layers.

Ash switches to a shad which does the same and bags a couple more. By now the drizzle's turned into a downpour. I sneak out another, before we retrace our steps back to the swim where we had our first flurry.

By now, the drain's started running off. There's a slacker in the bank and it's opened up, letting water gush in from a land drain. A couple of other half-hearted swirls and missed takes later, we're trudging back to the car, soaking wet.

Later, I wonder if this is the turning point, as I sling my Sundies on the radiators to dry. Can't wait for tomorrow podnas - maybe see you out there.
posted at 19:32