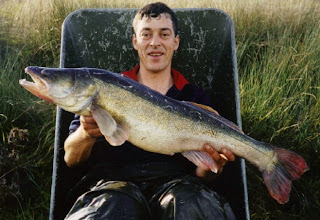 Barry McConnell could talk for England - and he talks a lot of sense, amid tales of his some of his madcap eel fishing adventures on the other side of the globe. As well as some incredible zander catches, he shared some thought-provoking ideas when it comes to locating them on waters like the Middle Level and Relief Channel.

He also came up with some cogent theories on why they've declined in recent seasons, through a combination of heavy run-offs and the spread of mitten crabs from the seaward side of the system.

I've met the guy at past PAC conventions, where he's had a trade stand, but he's such a modest character you'd never imagine how he got his head around the Fens in the mid and late-90s, when he was travelling down from Manchester to do marathon stints on the 'Channel.

I know it was an evening largely dedicated to zander, but what he said made me think about pike fishing too, especially when he described where and how he caught on one particular stretch where even I managed to catch pike reliably a few seasons back, without realising why the fish were where they were.

Big thanks to Barry - aka Zandavan - for a great night, that certainly gave us all plenty to think about.  Big thanks to Big Ash as well, for getting the guy all the way over from Shrewsbury for the evening.  I can see how knowing Barry has rubbed off on Ash, who made we walk miles last time I fished with him and kept saying just a bit further - let's try down there by them reeds.

Yet another great night's entertainment for a couple of quid on the door. The next meeting's on Wednesday, January 30, at the Wm Burt. We're finalising a speaker for that, if it comes off it should be another evening to remember.

My only slight disappointment tonight was we didn't get a few more people along. You don't have to be a PAC member or a top notch pike angler to come to a meeting. You're as welcome if you're new to the game or even thinking of taking up pike fishing as one of our regulars.

Here's a Zandavan vid from YouTube - check out the near 20lbs 'nuisance fish'....