First day out in ages 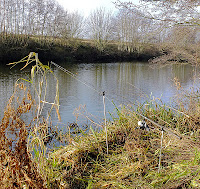 After eight days off, it felt good to get out again. The drain was pulling off quite hard as I stuck one out on a big float and two-ounce running lead. By the time I had the others ready to rumble, it had come to a stop.

It didn't look too bad, slight tinge of colour in the water and not much sign of bankside activity. The baits still held nicely with just a few swan shots on the traces, as the drain started filling up and the surface started running back.

By late afternoon, it was a struggle as clumps of marauding weed started to catch around the lines. I kept thinking I was going to catch one until the weak sun dropped below the floodbank and it was time for home.
posted at 18:19