Slow start to pike fishing in the Fens 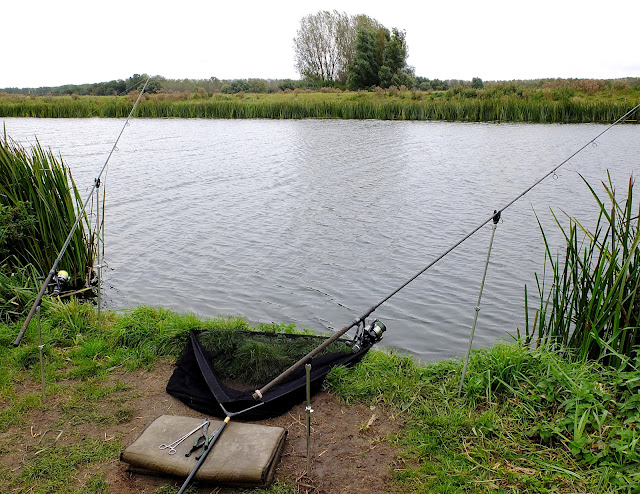 It says a lot when November comes around and you're running out of ideas already. Just about everyone else I know is struggling, which lessens the pain somewhat. But the question that remains is why.

I spoke briefly to a couple of the Cambs guys at last week's King's Lynn PAC meeting. One said the smaller fish which used to save a blank seem to have disappeared from a lot of waters down their way.

The swim above used to reliably hold a few pike of all sizes, as it's on a deep bend where the roach and skimmers shoal. Nowadays, getting a run's an event in itself on there.

One school of thought doing the rounds is there's now so much food in our drains and rivers that the pike are probably swimming around stuffed to the gills. Well fed pike are much harder to catch than hungry pike, for obvious reasons.

Lure anglers seem to be faring better than the herring soakers at the moment - possibly because pike will attack a lure on instinct, whereas one with a full belly might baulk at cramming in another deadbait.

I'm not sure I agree with the idea that the first frosts will throw the switch and bring them on the feed. But in the 15 seasons I've fished the Fens, I've normally caught far more fish in the first couple of months of the season than the rest of it put together.

This could be because I usually fish a lot harder for the first few weeks after the summer lay-off, because I'm full of the joys of going pike fishing again. Christmas is usually followed by a cold snap, meaning January and February can be quite slow in my experience.

Instead of a few hints on waters to try, my response to a couple of e-mails from anglers thinking of having a go in the Fens has been don't bother - it's so slow at the moment it's not worth the effort and expense of travelling from the North or Midlands.

This is a warts and all blog, meaning one that tells it like it is. Someone also suggested I was down playing things to put people off fishing the waters I fish. If I was catching, I'd be saying so - probably without mentioning where.

I met some Polish guys who'd travelled up from London for a weekend's fishing the other day. They were serious lure anglers, who looked like they knew what they were doing. One said he'd heard and read so much about the Fens he was surprised how hard it was to find a few fish. Join the club mate, I said.
posted at 21:30