Time to build an igloo 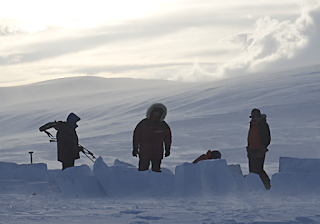 "Come on," says Malcolm. "You can't bottle it. I mean, it might be a bit cold but that shouldn't bother an old pike fisherman.

"Look, I tell you what. Me and Sid will build it - well, I'll design it (being an architect, obviously...) and Sid will do the actual, um, building as it were. All you've got to do is take some pictures and job's a good 'un."

It says more snow on the forecast, I shrug. But I'm sure they build igloos from ice, as in, like, where the eskimos live.

"I reckon you might be on for that tonight," says the New Barman, in the first of what I am sure will be many useful contributions to the wide-ranging debates which happen in the Village Pub.

"They reckon that's going to get down to minus eight or nine. And my name's Neil, by the way."