Heavy metal night in the village 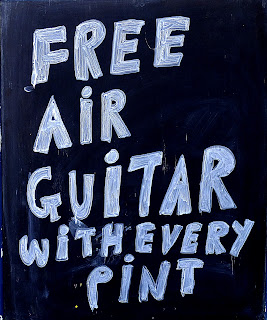 There have been a number of changes since my last visit to the Village Pub. I understand that life must move on and as the social fabric of rural Norfolk changes, the licensed trade must move with the times.

Hawkwind Sid has been allowed to organise a trial evening of musical entertainment, during which it is rumoured there will be a "special geust", according to the Parish Magazine, whose editor Veronica, the Vicar's wife, has still not mastered the use of spell-check.

A number of retired rock stars live in these parts, some of whom Sid - who once jammed with Hawkwind - claims to be on nodding terms with.

Neil By The Way, who is now the Village Pub's bar manager, is discussing the finer details of said *soiree* with said ex-hippy as I walk in.

I, um, think I might be otherwise engaged, I reply as Neil By The Way slaps a Shuck and a Jack chaser on the bar.

"We've got a Black Sabbath tribute band playing in the Beer Garden," adds Neil By The Way, by way of clarification, as I hand over a tenner and take a long sip on my Shuck, noting how the initial bitterness gives way to the complex blend of flavours associated with said ale.

"It's gonna be rockin' - they're gonna play all the hits. We've got an eat all you like buffet and the Vicar's mate who used to play the drums is coming."

Lemmy, Sid's dog, takes a lengthy wee against the end of the bar. The yellow puddle flows menacingly towards my new brogues. For some reason I can't quite put my finger on, I don't fancy food.
posted at 21:46