Cloudy day and another otter 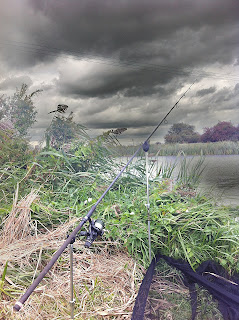 The wind's howling down the drain but I gave it a go all the same. Eight feet of water, the top two feet bowling along at twice the speed of the flow. I try angling the rods into the blow, tips just above wave height, but I'm not happy with it. When a passing lump of weed unclips me, the braid spills wildly off the reel down the bank.

Off to the river, where the wind's off my back. Two over the far side, one down the margin. Clouds darken ominously, but the rain holds off.

The club chairman appears and we have a mardle. As his 4x4 bounces off down the road, an otter appears in the middle of the river - the first I've ever seen on this part of the system. It's the third otter I've seen in the Fens in a fortnight.

I don't want to blame these once-maligned creatures for another runless day, as it reaches the far bank reeds and disappears from view.
posted at 18:16