Piping the wildness back into the River Wissey 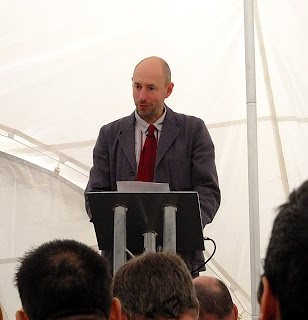 When I look around me, I see more than 100 people hanging on Charles Rangeley-Wilson's every word.

Officials, scientists and conservationists have gathered for an afternoon of talks and presentations about the recently-completed Wissey Fish Pass project.

Charles - better known as TV's Accidental Angler, fly fishing correspondent for The Field, author and passionate trout conservationist - is the keynote speaker. And what an incredible speech.

"The very idea of sea trout in this flat, root and crop landscape is a strange one. The fact that sea trout run in these mazy, lowland rivers is endlessly surprising."

Norfolk boasts more chalk streams than Hampshire. We have the Little Ouse, the Babingley, the Heacham River, the Nar, the Wensum. But the queen of them all is the Wissey, a river beloved of pike anglers as well as sea trout hunters.

Yet like its neighbours which criss-cross the Fens through man-made banks and altered courses, there are sluices and all kinds of obstructions which block the way to the sea trout's spawning grounds in the Wissey's headwaters.

"It's amazing that the sea trout has been so resilient in the face of so much change, that a few make it back every year up the Wissey," said Charles, before he gave the new fish pass his eloquent stamp of approval.

"It might look like a great big pipeline, but it pipes wildness back into our landscape. May God bless this siphon and all who swim in her." 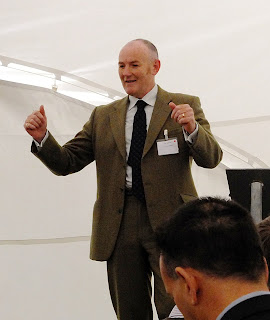 Earlier Toby Willison, Anglian regional director for the Environment Agency (right), explained how flood defences like sluices could inpact on fish like sea trout and eels.

"Some of these massive structures on our rivers form a barrier for fish and other aquatic species," he said.

Toby paid tribute to partners including Aquatic Control Engineering (ACE), who built the fish pass, and King's Lynn Angling Association, which controls fishing on the Cut-Off Channel, which the new pipeline connects to the Wissey.

"What the system will do is help the passage of fish, help their passage to spawning grounds, to nursery areas," he said. "I see no problem protecting the environment for its own sake.

Over the last few months, several people have noted a sea-change in the EA. Most of its top fisheries staff were there today - Kye Jerrom, Paul Wilkanowski, Roger Hannford and Karen Twine - aka the Barbel Lady. When you speak to these people about our fisheries, you can hear the passion in their voices.

I wonder briefly why I'm the only pike angler there. For as the apex predator in our rivers and drains, the pike is as much of a baromoter species as the sea trout - one whose fortunes are just as closely linked to the health of our waters. 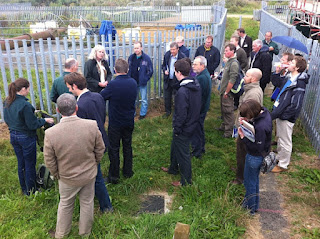 Her company installed the strobe lights in the pumping basin at Welches Dam on the Old Bedford, along with an array of fish friendly features elsewhere including a fish flap in the tidal gate at the end of the River Stiffkey, in North Norfolk.

I have a feeling fishing's going to get to hear a lot more about ACE in the near future, as it provides the engineering know-how to do what anglers and conservationists have wanted to see for years.

Barry Bendall, regional director for the Rivers Trust, outlined some of the work undertaken by its staff and 15,000-strong army of volunteers around the country. While the movement to restore and safeguard our rivers is gaining pace, the powers-that-be are also putting their money where their mouth is.

Barry said government funding for catchment improvements had increased from £1.9m in 2009, to a £10m a year commitment for the next three years, via a catchment restoration fund.

A kingfisher flashed past the marquee where we adjourned for lunch. Rudd were topping in the river. Charles Rangeley-Wilson told me he's drawing up a catchment management plan for his favourite river, the Nar, as we compared notes on the ups and downs of our recent pike fishing. Something similar is planned for the Wissey, with Kelvin Allen, the chairman of King's Lynn Angling Association, the driving force. 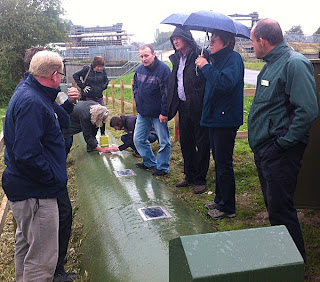 In many ways, the future's looking good for both fish and anglers in the Fens. The Wissey Fish Pass will hopefully be the start of a long-overdue revamp of our river catchments. What it does is enable fish of all species to pass between the Cut-Off Channel, dug to relieve the system of excess water after the 1947 floods, and the Wissey.

Incredibly - for what's basically a Fen drain - the Cut-Off gets a small run of sea trout, which find their way in via the Relief Channel and its enormous tail sluice where it meets the tidal Ouse at Saddlebow, near King's Lynn.

But their path is blocked at Stoke Ferry by a sluice which remains closed except at times of high flood risk, along with young eels ascending the system. The new fish pass will enable both to complete their migration, along with bread and butter coarse fish species like roach.

I know of only two sea trout which have ever been caught in the Wissey or the Cut-Off - both of them by pike anglers. So will they become a viable target for our attentions in years to come..?

Charles Rangeley-Wilson admitted his pursuit of salmo trutta to date in Norfolk had not been as successful as some of his forays to further-flung corners of the world.

"You hear rumours about them," he said. "But I've seen even fewer and I've only caught one."

Click here for a bit more about the fish pass and some of the scientific work going on to survey fish movements in the Fens.
posted at 19:08