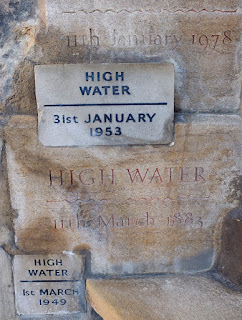 The weather swings the other way in the Fens, as in back towards the 20s. Wednesday looks like it might be colder, looking at my weather app thing --> so I'll probably squeeze a sneaky one in then on the off-chance the northerly wind and a bit of ripple get 'em going.

Scope for days off is somewhat limited for the best part of a week after that, so no point window shopping  the weather for now. I know what I want longer-term, which is more rain. Preferably while I'm at work, as I hate fishing in the stuff, but like what it does to the rivers and drains when it buckets down in the autumn.

This summer has been the wettest since 1912 and the second-wettest in a century according to the Met Office website. Not enough to bring flooding to the badlands, which requires a set of variables which rarely occur together.

You wonder how much water that would actually take, looking at the markings on the porch in the Minster in King's Lynn.
posted at 18:58