Is silt slowly choking the system in the Fens? 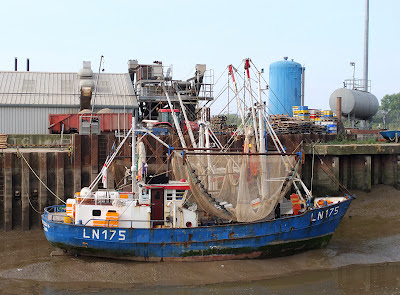 Did the shrimp boats sit this high and dry in the Fisher Fleet at low tide a few years back..? I'm not so sure they did.

The tidal river's silting up so badly in Lynn that the council is looking to buy an amphibious vehicle to replace the ferry that runs from King Street to West Lynn.

The report to councillors makes quite interesting reading when it comes to the state of the Ouse - scroll down to the first agenda item here.

What's all this got to do with pike fishing, you might ask. Well the tidal Ouse is the end of a system of rivers and drains that stretches far inland. In recent years, siltation has caused problems in the Delph, when water wasn't cleared off the Washes because of the shrinking window when it could be run off via Welmore Sluice.

Reading between the lines regarding the recent renovation of the Relief Channel tail sluice, the Channel's going to be increasingly relied upon to discharge water, as it by-passes the silted up stretch of the tidal between Denver and Eau Brink. This could prove a blow to hopes that fishing on the Channel might improve once the gates were de-silted which allow the Ely Ouse to flow into the tidal between tides.

Things are changing fast out there. Not even the rain we've had over the wettest summer for nearly a century has been enough to scour the tidal. The tide comes in with more force than it goes out, meaning the flood brings in mud faster than the ebb can clear it.

Disaster might not be looming toworrow. But the tidal river governs how the entire system operates. And sooner or later, there's going to be a tipping point when it comes to actually getting water away. Take the new pumping station at St Germans, which can now move water out of the Middle Level  at all states of the tide.

This relieves the immediate risk from the Middle Level, but where does the water go against a rising tide - back upstream, adding to the problems of siltation upstream in the tidal, between St Germans and Denver.

This might make the Welney and Ouse Washes more prone to flooding - what they were designed to do, some will doubtless argue. But what happens as the tidal Ouse between Denver and Welmore becomes more silted, reducing the scope for clearing water off the Washes.

Click here for schematics which show how that part of the system works. See what I mean..?
posted at 20:57