Is it time to get the lures out..? 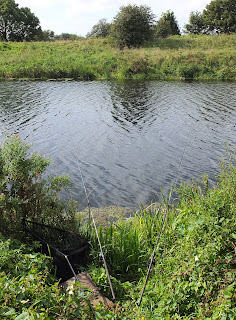 On the plus side, today was a great day to be out - colder than it has been for a while, with a stiff north-westerly blowing. I left the heavy rods at home and went for a wander on part of a drain I haven't fished in ages instead. The swims I fancied are a long walk, but hardly anyone fishes them and they've been filed away in the must try sometime draw for ages.

It looked like it was worth the walk when I finally found a way through the knee-high nettles and other vegetation and took a look at the water. Bit clear, but so's everywhere at the moment. Bit weedy, but it's the right sort of weed, as in the stuff that grows up off the bottom rather than the dreaded azolla.

Bit blowy, but that's not a problem as I like a nice ripple. Best of all, no-one's fished it yet, looking at the virgin bankside growth. It takes a few chucks to get the depth right, mainly because it's deeper than I was expecting - several feet deeper than the average six or eight feet of water you find elsewhere on this drain.

Fifteen minutes' faffing about later, I've got two out with a pilchard on one and a nice foot-long blood sucker on the other. Two hours pass, I change swim after an hour and the next one looks even better but fails to produce a pull.

Around lunchtime, I decide to hoof it back to the motor and try another bit of the drain where I have had the odd fish. It's shallower, weedier and by the time I've got the baits in, it's running off deceptively fast. I change swim a couple of times, but again it's dead as a door nail.

Something occurs to me as I'm packing up to head for home. Something that might seem obvious, but is worth recording all the same. This time last year, you couldn't fish a lot of the system because it was weeded over with azolla. When it cleared, we caught some good fish that were lean and hungry - probably because they'd been sitting in the dark under the blanket weed not feeding.

This time around, the drains are clear and full of life. And I doubt the pike in them have been going too short on the food front. Maybe it's time to grasp the nettle and give the lures a go - as in leave the bait rods at home and give it a serious go.
posted at 17:04