Best lure for pike fishing in the Fens..? 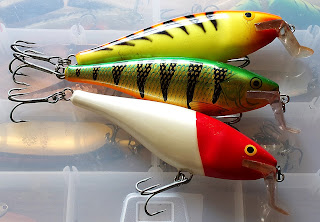 I used to catch more pike on Shad Raps than all my other lures put together. Back when I used to use lures far more often than I have in recent seasons, when I used to regard it as a good method on the right day.

Other anglers have a love-hate kind of relationship with these babies. Some reckon they can't get a hit on them. Some regard them as poor hookers, which I've never found to be the case, although I do check the hooks every few casts and give them a swipe with the sharpening stone as soon as they don't catch when you drag them over your thumb.

One reason I like them so much is they seem to work equally well cast or trolled. When you cast them, you can twitch them back slowly, bulging the surface. Or you can get them down with a few sharp swipes with the rod, reeling the slack in faster to keep them running deeper.

You'll struggle to get them down much deeper than six or eight feet casting, but that's often all you need on the shallower drains and rivers. If you feel that big lip hit the bottom, pause briefly and the lure's so bouyant it backs off without snagging most of the time.

My best one's not actually in the picture. I can't remember ever catching anything on the red and white one, which explains its pristine look. The yellow one's nailed a few in its time, but the ones that always worked best for me were the roach patterns - both the natural one and the silver foil variant, closely followed  by the shad-patterned one with the blue dot.

Messing about with these to get a picture of three lures has got me quite into using them again. One ambition for the coming season is my first twenty on a lure. I've somehow never managed it, although my lure captures include pike to just shy of 19lbs and half the rear bumper from an Austin Montego.
posted at 20:59