Chips are down in village 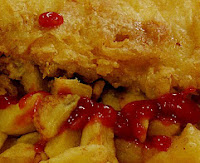 The Vicar has that worried look I have sometimes seen etched across the faces of members of the clergy at times of crisis in the church.

A small crowd has gathered in front of the Vicarage. While I do not propose to embark on any kind of blame game in the heat of the moment, the Vicar's foreword in the Parish Magazine clearly stated that a visitation from the Chip Van would occur this very evening.

And yet there is no Chip Van, or takeaway food of any description available outside the Vicarage.

"Where's the Chip Van then Vicar," a woman asks. "I tol' my kids th'ass sossidge an' chips fer tea."

The Vicar wrings his hands, looking up at the leaden skies for inspiration. Were I in the Vicar's shoes, I would crisis manage matters and pledge a full, independent inquiry, using social media to reach my key audiences and generate stakeholder sympathy.

I would probably also include an update in my Sunday sermon, perhaps moving the narrative on to more positive territory by stressing my ownership of the problem and the steps being taken to resolve it.

The opening bars of Paranoid by Black Sabbath shrill from a pocket of the Vicar's coat. It is the Vicar's mobile. I do recall the Vicar telling me he was a roadie for various heavy metal bands, before becoming a vicar.

The Vicar confers briefly, before he turns to the queue. The Chip Van has a flat tyre. It is stuck on the A149 somewhere near Snettisham. There will be no chips tonight.

I feel the crisp new twenty pound note in my pocket, as I set off through the drizzle for the Village Pub.
posted at 19:30