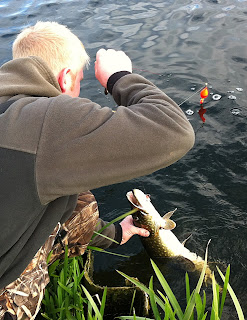 A plan forms, regarding the lack of jacks. As I use three or four rods a lot of the time, why not sacrifice one of them to targeting small pike next winter, with a small dead or un-dead dropped in the margins.

This stems from an interesting point of order from m'learned friend, along the lines of you don't catch many jacks using deads the size of my usual bait choice - as in eight or 10 inches, with a couple of size fours or twos stashed in them fished on (mate's emphasis...) your usual crude bad boy rigs that'd pull a horse out.

I don't fish pike matches, but know that some of those who do target small pike on the basis you win more catching a few jacks most of the time than you do sitting it out with a big bait hoping for a twenty.

Some of them scale their tackle down too, which I'm loathe to do, because I caught the odd big pike using small baits, along with lots of small fish, before I switched to using big baits most of the time. I'll probably get bored with this after a few weeks, but it might prove an interesting exercise until I do. As in are there any small fish left in you know where, you know where and, um, you know where.
posted at 21:22