Spare a thought for the pike amid the downpours 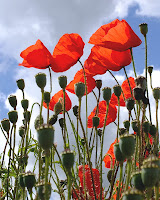 Poppies dance in the wind as the clouds thicken, ready for yet another downpour. It's mid-July and it feels like September already in the Fens. Autumn never comes soon enough for me most years, the time all pike anglers yearn for as the geese sing Summer's swan song and we make our plans for the winter ahead.

While I've long given up pondering the vagaries of the weather, I can't help wondering what this autumn's going to bring when we get back on the rivers. You never know, the brief heatwave widely tipped to happen as July gives way to August might not be enough to bring them to a weed-choked standstill.

But the last couple of winters have shown there are a lot less pike, particularly smaller fish, in some of our waterways. It'll be a season or two before we know whether this year's spawning was a success.

Yet the summer's downpours might just have been what nature needs to start restoring the balance, after two dry years. Spare a thought for that, as long as the rain lasts.
posted at 20:07