Do you take your dog pike fishing in the Fens ..? 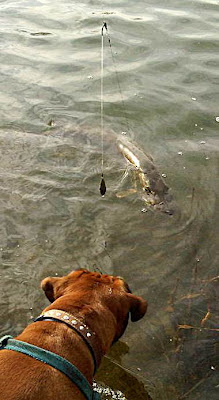 Do you take your dog out pike fishing..? I used to take mine whenever we fished the pits, because he could have a good old run around in the fresh air out in the middle of nowhere.

While boxers are meant to be scared of water, mine loved it from the the first time I took him out as a ten-week-old puppy , when he stepped off the bank onto a lily bed and I ended up going in after him.

My dog eventually learned to swim. This turned out to be a bit of a mixed blessing. For as he got his head around pike fishing, he'd sense the excitement as you played a fish and go straight in after it.

On slower days, he'd walk up to your rods and knock them off the rests to set the alarms off. When I fished with mates, he'd amble up to theirs and piss on their reels.

If you brought food, he'd find it. He's a lovely dog, said one sucker, feeding him half his pasty. The dog walked up to his unhooking mat and left a great big steamer right in the middle of it. 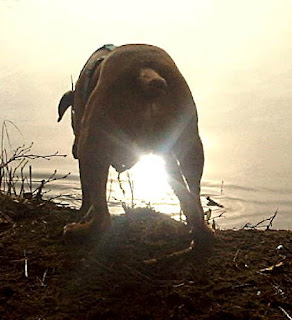 My companion shrugged this off as some kind of canine misunderstanding. My dog had got away with it, yet again and he knew it. I wondered if he had the proverbial golden balls.

When a wildlife photographer accompanied me to try and get a picture of some otters, for a newspaper feature we were working on, I set him up with his long lens trained on the animals' usual patrol route. The otters failed to show.

One popped up the next day, right under my rod tops - the dog and the old dog otter in a mexican stand-off, the dog growled, the otter spat like a cat as I rummaged in my rucker for the camera.  By the time I found it, the otter was gone.

I did catch a good fish once when I was out with him. A gravel pit twenty. The dog was asleep and I got a half-decent picture of the pike in the landing net before the dog woke up and began trying to supervise proceedings by weeing on the rod.

I slipped the pike back as Johnny Block came along. "How big was that Cress," said Johnny. The dog growled at Johnny, for some reason, when I told him it was a twenty.

Johnny looked the dog straight in the eye. "Don't you bleddy well growl at me buyhh," he said. "Bite bleddy smart-arse I jus' had a fuggen' pike Cress..."

Golden Balls turned round and sunk its teeth into my Skeeters, as Johnny disappeared laughing his head off.