Pike fishing rigs and tackle for the Fens 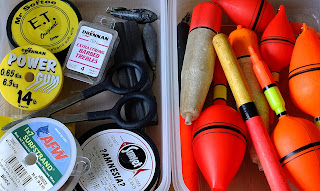 Rather than having an array of rigs up my sleeve, I tend to use just two for most of my bank fishing which I can tweak according to how far out I'm fishing and whether I have any wind or flow to contend with.

The mainstay of this is the float-legered dead bait, which ticks most of the boxes when it comes to a simple, reliable set-up you can use just about anywhere.

At the start of the season, when the rivers and drains aren't pulling off much and there's still some weed about, I fish fairly light with just a couple of small bullets above the trace swivel to give me something to tighten up to. The bait provides enough weight to cast 20 or 30 yards.

The float's set just over-depth by a foot or two, so it lays flat when the rig settles and cocks when I put the rod in the rest and tighten up. A slight breeze or a little flow helps by dragging the floating braid I use on the reel into a slight bow.

If I need to cast further or the wind or flow are enough to drag the bullets along, I'll swop them for a run ring and an ounce flat lead, or larger bomb.

There's a stop a couple of feet above this, which the float attached waggler-style via link swivel sits on when casting, to help avoid tangles. I use and swear by the various sizes of ET Bob Floats for this, as they allow you to change to a larger float if needed to prevent it being dragged under by the wind or flow. 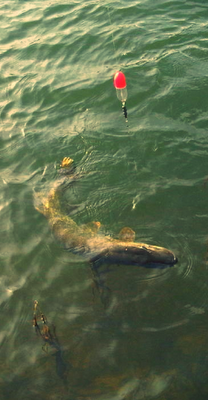 That's pretty well it, except when fishing off a boat or when fishing flowing rivers, I tend to use a through-the-middle slider and fish with the rod tops angled upwards to keep some of the line off the river - especially when there's floating weed to contend with, as there often is in the autumn months.

For gravel pits or smaller drains, I might change the rig to a home-made balsa pencil float, with three or four swan shots on the trace to tighten up to. I say might, because more often or not I leave the rods tackled up and just use my river/drain rig if I switch to a stillwater or decide to have a day on a pit.

The other rig is the legered dead, usually with a heavy lead fished on a nylon link a few inches shorter than the trace, attached via a run ring. I can cast his further than the float rig and fish with the rod tips sunk if it's blowing a gale or floating weed makes float fishing impossible.

I can pop baits up safely using this rig. I don't like popping baits up under a float because of the risk of tangles. Bite indication is provided by a bite alarm and home-made drop-off with the leger rig. This pretty well it, as far as how I fish is concerned.

I make my own traces, usually using Owner ST36, Drennan Extra-Strong or VMC trebles, usually in sizes four or two depending on bait size. Wire-wise, I use Mason's Multistrand, which at the time of writing costs around £25 for 200yds in the 30lbs strain, for my home-made traces twisted up in my study.

These are stored on a home-made rig bin made from a section of pipe insulating foam and a plastic tub. I'll also have some ET Mr Softee wire with me on the bank, along with a few spare hooks and swivels, as it's easy to twist up traces using this wire if I run out of traces made from Mason's.

I've found other wires to be a mixed bag when it comes to their resistance to kinking. I've tried various 49-stranded wires, which I now rarely use because they need to be crimped. Crimping's as sound as twisting when it comes to reliability, as long as you use the lark's head hitch on the bottom hook and swivel, so the crimp is just keeping the loose end tidy rather than taking all the pressure of a hooked fish. 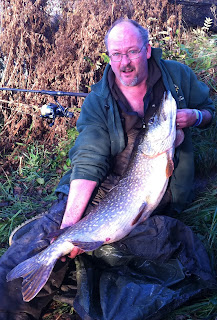 Once you learn to twist properly - again use the half hitch, then heat the tag end of the wire to anneal it before you make neat, tight twists with a twiddling stick - you'll probably never use crimps again.
I carry a sharpening stone to ensure the hooks are sharp. On gravel pits, I inspect them carefully every cast, as it's surprising how often you can blunt them without noticing until you bump a fish off because they fail to go in on the strike.

Strike's a bit of an out-dated term that harks back to the Mr Crabtree days - as in strike Jim, strike - as with modern-day braids you just wind down until you feel the fish and bend into it.

If you don't use braid, you should. As well as it's lack of stretch, it has a breaking strain four or five times that of mono of the same diameter and lasts for season after season if you choose a brand like Powerpro.

You need to use slightly different knots, like the uni or grinner knot, passing the tag twice through the clip before you form the loop and carefully tighten it. Other than that it's far more reliable thanks to the extra safety margin of 50 or 65lbs breaking strain.

It also floats, which is an obvious advantage for float fishing. When legering, it also sits up off the bottom and drifts upwards when a fish unclips you, meaning less change of snagging up.

For most float fishing, I use either Fox Predator Elite rods in the 2.75lbs test curve, or the now long-defunct Marvic Pike rods, which are delight to play fish on but a nightmare to cast with because of their small rings.

Both are married up with Shimano Baitrunners or various vintages in the 10,000 or 8,000 sizes. Some of these reels are 10 years old and still going strong, apart from the annoying spool wobble they seem to develop after a few seasons.

For legering, I use Fox Predator Elites in the 3.25lbs test curve, fitted with the old metal Daiwa Emblems, which just seem to go on forever without going wrong.

I carry the rods tackled up, with the sections held together with rod bands and those elasticated hair bands you can get from pound shops. If I'm fishing near the car, I just sling the rods in the back. If I've got a walk,

I'll stick three or four in a quiver depending how far I have to tramp to where I'm fishing. 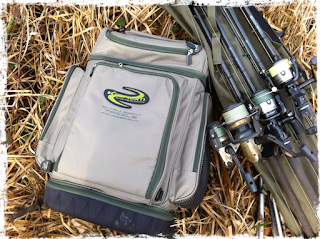 All my gear goes in one of the smaller Korum rucksacks. A mate got me into these and they're superb for pike fishing. I have scales, weigh sling and camera in a couple of the pockets, unhooking tools in another and carry spare floats, leads and trace-making materials in a couple of small plastic lunchboxes.

Even with a cool bag of baits, I've got room for spare clothing, a couple of pasties and a can or two of Wh'upass or bottled water. When it's cold and I'm fishing out of or near to the car, I'll also take a stove, kettle, cooking stuff and food.

Whatever I'm doing, I carry a first aid kit in the bottom of the rucker - antiseptic wipes, wound spray, bottle of Dettol, waterproof plasters and surgical micropore tape. Sooner or later, we all get raker rash or a worse cut from unhooking a pike, get a hook in our fingers or imopale ourselves in a barbed wire fence, so it make sense to carry the basics to sort these kind of minor injuries out so you can carry on fishing.

I also have a bigger first aid kit in the car, for more serious stuff like cuts and burns. Once or twice, I've helped out other anglers who've done themselves a mischief on the bank - I'm surprised how many people I meet don't even carry plasters with them when they go out.
posted at 05:00