Getting set to start pike fishing in the Fens again 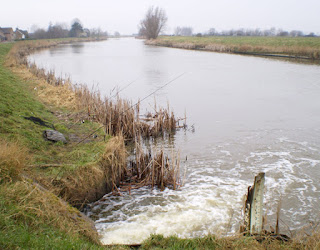 I'm going to start pike fishing again in another month or so's time, provided the summer doesn't end with a spell of hot, dry weather.

This is the kind of scene I hope to see - water being pumped off and the rivers and drains brim-full, because I seem to do better when it's like this in the autumn, rather than drought conditions and sluggish flows.

I usually have a few trips in mid-September, looking at waters I plan to target over the autumn months.

While I'm planning to give a couple of new areas a go this season, I know a few of us will also be targeting a water which threw up the odd big fish after we stumbled across the right stretch and learned a little about it.

I guess this is how a lot of pike anglers operate, pooling the odd snippet of info with their mates. But while you can adopt a loose lips sink ships policy among the crowd you knock about with, you can't legislate for leaks from the non-fishing public.

When a mate had a big fish from a swim where I'd had one last winter, I was thrilled he'd caught a fish over 25lbs from somewhere I'd put him onto. But the plot thickened when I compared the pictures and my mate's twenty-five turned out to be a different one to mine.

I wondered what the odds of that happening are. My fish looked big, even though the pictures were done in a rush on a mobile phone. My mate's fish looked a real belter, absolutely mint. Apart from the green-tinged wish I'd caught it moment, I wished I had a picture that good of my fish.

My mate said a dog walker photographed it for him. Next time I fished there, a man came along the bank with a dog and we got talking. You after pike then, the man said - saw someone catch a lovely one here the other day.

When I got home, I rang my mate. Nah, definitely not 28lbs, my mate said. Anyway, it was a woman walking her dogs who photographed it. Not a bloke.
posted at 21:30