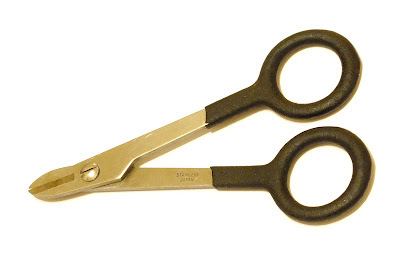 Some of the best bits of pike fishing kit are the ones which you can just take for granted and forget about, because they never let you down.

I've used Fox Trace Blades since they first came out, because they're the best tool out there when it comes to cutting the trace wires I use for bait fishing.

I didn't realise quite how useful they were until I lost them and it took me a week to get round to buying another pair.

They now cost around a tenner, but when you bear in mind they don't seem to wear out and are just as good at cutting braid as they are at cutting wire, that's not exactly expensive.

Most people I know have a pair of these. As well as making traces and trimming knots, they're handy to keep in a pocket somewhere in case you have to cut a trace when you land a fish with a flying treble, or when the bottom hook is hanging out of the gill arch.

I have a couple of other Fox tools - a pair of their long-nosed pliers and a pair of their cutters. The pliers are sometimes better for unhooking fish, especially wheh you chin them or unhook them in the water over the side of a boat. The cutters come into their own when you need to cut a hook that's snagged in your net mesh; or sometimes when it's easier to cut a hook and remove it piece-meal, like when you get one in a pike's rakers.
posted at 19:35